Ansoff working on how corporates grew considered a number of important concepts taken up later by other writers, including the core capabilities of the organisation, its product and market scope (or marketing focus) and competitive advantage. The strategy for growth could exploit these factors and consider the options for development which Ansoff defined in his Product-market growth matrix. 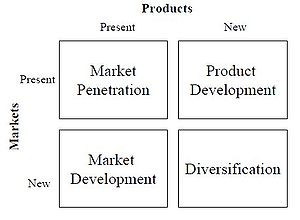 As a business moves from market penetration into product and market development, the level of risk increases and is at its greatest when going furthest into the unknown – into diversification.

But surely all this is only relevant to corporates? Not so. Many small businesses seek to develop into new markets and new product areas before they have fully exploited their core market – sometimes before they have proved they can make a profit in the core business. And tough economic times or sudden new growth opportunities sometimes encourage businesses to look into other products and markets. Of course, this can be a productive strategy, but it has a higher risk of failure than developing the core market – and it is likely to cost more, as penetrating new markets usually involves marketing expenditure, especially as the existing competitors in that market are likley to react to a new threat.

There is a tendency – at both small business and corporate level – to believe that ‘the grass is greener’ over the hill in that new market. But once there it often looks remarkably like the other side of the hill! And with the added disadvantage of being an outsider. Also whilst doing this, are you leaving gaps in your core market for a new competitor to enter? Ansoff understood the risk and also that such decisions were strategic and not short-term reponses to situations. Certainly for most businesses it is sensible to make sure that they are operating most effectively in the core market with existing products before pursuing any of the other options.

And as for diversification, the difficulty and risk is even greater to grow organically – and probably equally so by merger or acquisition. Small companies can grow in this way too, but the track record in corporate life is that most mergers or acquisitions do not achieve their objectives. For Ansoff synergy is the key where 1+1 = >2; thus merged sales forces may be able to maintain the same level of calling with smaller sales areas, less travelling and less sales numbers than separately: but will all the products get as much focus? This is where sometimes synergies exist in theory but prove elusive in practice.

Sometimes, if the core market is changing rapidly and there is no way forward for the business, diversification is the only way of surviving. And there are rewards to be achieved by diversification – but they are rarely as great as supposed and often the downside risk is very significant. So any such decisions require very careful analysis of both the potential reward and the potential risk.

But synergy can be sought in other ways without such large risks; for instance co-operative working with related companies. Tough times sometimes require drastic solutions, but often these are closer to home rather than in diversification. Look very carefully before you leap!